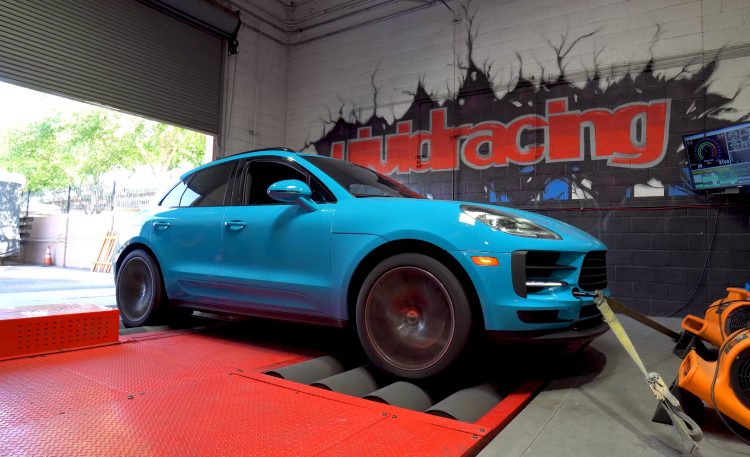 In the world of small performance-oriented SUVs, the Porsche Macan has long been one of the favorite options for many enthusiasts. It’s small, nimble, and it offers enough performance to take many modern “sports cars” by surprise. Thanks to Porsche moving toward a fully turbocharged product lineup, getting more power of the Macan S has never been easier.

The 2020 Macan S features an all-new 3.0L V6 with a single turbocharger setup. This is quite a bit different than previous Macans which had the option for a twin-turbo V6 engine. There are pros and cons for both types of turbocharging systems, but with the new 2020 set up comes new opportunities for more power, all of which can be unlocked with a simple ECU flash.

Luckily, the ECU placement on the Macan is extremely easy to get. Once it’s removed, it can quickly and easily be unlocked on the tuning bench which allows it to be flashed with different tuning parameters. Before we installed the new tune, we took the Macan S over to our dyno to get some baseline power figures, which allows us to measure to increase in power accurately once the tune is installed.

With our all-wheel-drive Mustang dynamometer and high-ambient temperatures in Arizona, we expected relatively low baseline numbers. In totally stock form, the 2020 Macan S put down 293hp and 350lb-ft, which is about what we expected. With a few runs we knew we were getting consistent numbers, so it was time for some tuning.

With the ECU flashed with our VR Tuned system, we tested the Macan S in the same environment with nearly the same ambient temperature. With more boost, improved air/fuel ratios, optimized ignition timing, and many other changes, the 2020 Macan S put down an impressive 316hp and 439lb-ft.

Due to high temperatures and the Macan’s relatively small turbocharger, peak horsepower gains are relatively modest, but the mid-range and low-end power are massively improved. Mid-range power is arguably the most important for day-to-day driving and 0-60 runs since the amount of time spent at high RPM is much less than the time spent at low and mid-range RPM.